We flew in to Bastia and by the end of the week we would have looped around the North of the island.

Most of these holidays are priced based on two sharing, so in the early days, rather than pay extra (tight Yorkshireman), I would risk sharing with a stranger. I say risk, as some people snore like you wouldn’t believe. I was lucky on this trip as I met someone I have kept in touch with, an Irish guy from Hampshire called Phil. We managed to get through the whole week without getting on each other’s nerves (I think, Phil may have other thoughts), and spending most of the time double up with the giggles.

We headed north from Bastia around the coastal road to Cap Corse, the northern tip of the island. Some of the road left a little bit to be desired but the views were stunning.

After a stay in a nice hotel with views of the bay, we headed out on day two, which would lead us inland for a short time before we drop back on to the coastal road. We were heading from St Florent another 100Km to the coastal port of Calvi, which should be around 1300m of climbing. By midday we had dropped in to the old port town of L’Ile Rouse, before heading on to Calvi.

We woke up on the third day to ride from Calvi to Porto roughly 80Km with a total ascent of 1300m. We follow the coastal road towards Porto. The narrow and twisty route winds its way high above the coastline, before descending to the oasis of Porto. 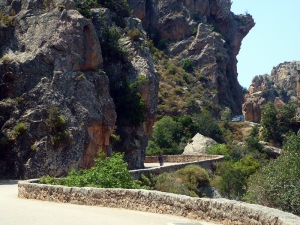 Porto gave us the opportunity of a rest day, but we had a quick spin up to Piano for lunch. This was a beautiful climb with the sea on one side and the cliffs on the other. Lunch was in a small pizzeria in the town and eventually we had a safe descent back in to Porto.

Rest day over, we set off on the sixth day from Porto to Corte, around 85Km and 1900m of climbing.

This has to have been one of the best cycling days of the trip. As we turn inland heading East along the amazing Spelunca Gorge.

Climbing from sea level up through this sheer sided gorge and crossing the Col de Vergio at 1477m. We took a rest at the monument to the lady, which gave us chance to take in the views before dropping down through another imposing gorge on our way to our overnight stop in Corte, the mountain capital of Corsica.

We were now on the final day, the 110Km ride from Corte back to Bastia and despite the fact that we are heading back to sea level, we still manage to climb 1500m.

The day takes us through Corsica’s “The Castagniccia” famous for its beautiful chestnut forests.

Overall this was a stunning ride, with great views and a few challenging climbs, highly recommended for cycling as the roads were so quiet.